Okay, so I haven’t established a routine with my new kefir yet, but I’m having a lot of fun playing around and trying new things. I already learned that a second fermentation on the counter will result in curds and whey, but that was awesome because it made it easier to strain and tomorrow we will have a cream cheese fruit dip with apples for a great snack :). I’m loving how flexible this is, that I can pretty much make any dairy product with it (I’m going to get an ice-cream maker for it before Summer comes), and there’s such a wide range of smoothie flavors to play around with.

I have a neighbor who was born in the Ukraine, he’s pretty much American but his family still talks longingly of rye kvass and kefir, I’ve had to learn to pronounce it “kee-fear” even though my local health food store calls it “kee-fur” or he gets all angry stalwart Ukrainian on me.

I liked making sauerkraut, but after two batches of it I was so sick of it that I couldn’t bring myself to eat it anymore. It seems that may be an occasional treat, I really would like to try it on a burger. If I get a jar to make a smaller batch in that will refrigerate, that might be best. The ginger bug for sodas is out of my budget for something to keep up each day, though I do find that it’s so easy to start up that I can enjoy it occasionally. I hated dilly carrots, and I’ll find out soon about pickled onions.

I did like the beet kvass though. So, that might end up being a regular thing, especially since the pulp was great in meatloaf patties. It looks like my kvass routine will end with juicing the veggies after fermentation and using the pulp in meatloaf, crackers, and breads. With some tweaking, I hope to bring the red meat part of my patties to as low as possible while still including it in our diet for variety. I’ll share when I do figure out, but it might be a couple of months as my kvass factory won’t be nearly as full blown as my kefir factory. For now I’ll tell you that above was about half pulp (beets, carrots, and ginger), half meat, with one egg and a handful of quick oats (because I had no stale sourdough but I would have preferred that).

Anyway, so as far as probiotics go, it looks like I’ll be focusing on kefir with the occasional kvass and even more occasional experiment with a new vegetable pickle. Also my grains need a name. It’s something I’m chewing on.

By the way, check this out. Remember those tiny plants I posted pictures of on my birthday just a couple of weeks ago? 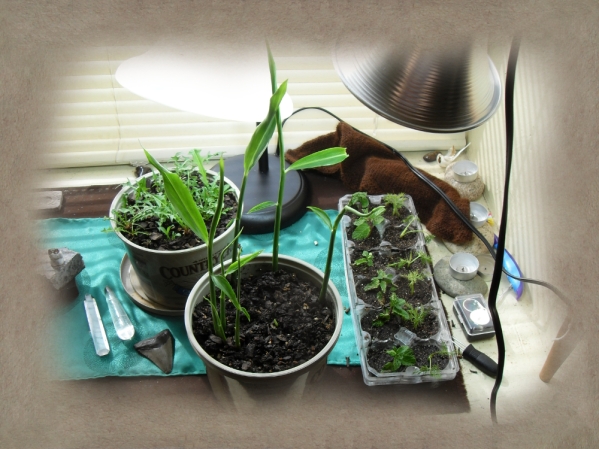 Growing right along. Next to them is a bit of mint and dill, cuttings from some rather wilted herbs at the store that may not root well (being so far past their prime) but hopefully one or two will make it. I bet the mint does, that stuff is seriously hardy. I’ll tell you more about this little window some other time. Right now I need to go wail and whine and lament that my ink pen is throwing a tantrum when I want to draw.

What is this? Well, basically it's an urban Pagan lifestyle blog. This means it covers tolerance for all religions and beliefs, reverence for the Earth, sustainable living, a seasonal lifestyle, and a personal quest to live responsibly, kindly, and with regard to both the earth and the people who live there. Right. I'm so not perfect though and morons still make me want to kick them in the shins and run away.

Get smarter while ending hunger.

Don't forget to look at my pages from the drop-down menu at the top of the page. That's actually the purpose of this blog, a place for me to organize what I'm studying and learning, and sharing my notes with others. Also, brushing up on my sketching skills ;).